“Making a museum ourselves” is the motto of Berlin’s Schattenmuseum. The young and adult members of the Schattenmuseum aim to rethink museums. They develop proposals for museums and cultural institutions on how to deal with different communities, collections and educational approaches. Content, methods and artistic formats are developed and implemented collaboratively. The Schattenmuseum thus opens fields of experimentation between museums and schools, museums and urban spaces or museums and young people.

For HKW’s projects The Whole Life and Where is the Planetary?, the Schattenmuseum developed a performative guided tour through and around the building from the perspective of an alien; a stranger to whom the building was previously unknown and who finds it difficult to access. The Siribox developed by the Schattenmuseum, an analog “toolbox” for interactive engagement with artworks and the architecture of HKW, is available for visitors to download [Apple App Store] and borrow on site. 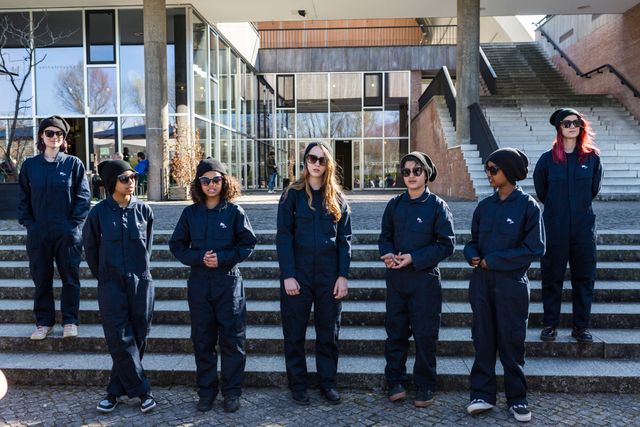 Guided tour for visitors 8 years old and up

Siribox is an analog “toolbox” consisting of experiments and instructions with which visitors can interactively explore works of art and the architecture of the house. They can take each of the experiments out of the box and try them out. Siribox can be borrowed at the HKW ticket counter.

Siribox Mini, an app, is the digital evolution of the analog version. In nine experiments, users can playfully explore hidden aspects and content in artworks, exhibitions, buildings and the urban space. The app can be downloaded for use on site at HKW, supplemented with one’s own experiments and saved locally.
Download [Apple App Store]

Conceived by the Jugendgremium Schattenmuseum. The Siribox is the result of a collaboration between the Schattenmuseum and the Berlinische Galerie, the Siribox Mini was produced in cooperation with KW.